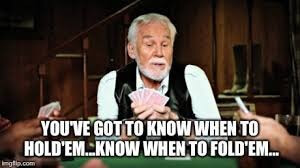 I was negotiating a contract with a major player in the on-line e-commerce space. They sent us their boilerplate contract to sign.

I read the contract. Not to re-hash everything that a friend of mine Bart Eagle, Esq. wrote in his article Look before you leap you really need to read that contract and object where objections are warranted.

I went about highlighting aspects of the contract I did not like. Then the California corporate attorney (sorry, it was not you Bart) went through the contract and re-wrote both my issues and some that he had. The modified contract was sent back to the Vendor and there is sat.

Two or so weeks later, we forced them act. On a conference call between three of their people and myself yielded this type of conversation:

Me: Your contract wants me to assign to you the ability to modify trademarked logos that I don’t own. I don’t have the legal right to do that.

Them: All our clients sign that clause. Sometimes we need to re-work the trademarked logo.

Me: Why would I give you permission, which puts me in jeopardy of losing a lawsuit when I know better?

Them: Are you being difficult? Because if you are we don’t need to work with you.

Me: I’m not being difficult, I’m being smart, smart about the law, smart about protecting my company and negotiating contracts that are fair and not one-sided is my job.

Them: You know the contract is just a formality. Once we sign it, we put it in the filing cabinet and never look at it again.

Me: Let me talk with the CEO, and Ill get back to you.

There were other issues discussed, met by the same type of logic, the vendor was the big boy and what they said went. Sometimes you need; in the words of Kenny Rodgers know when to hold them and know when to fold em.

That was the end of that relationship.

Lesson of these stories is do not be bullied. Yes, the deal may fall through and yes, it might hurt the bottom line. However that yes to the deal, may turn sour and that contract you were bullied into signing, that was so lopsided in their favor will come back the haunt you

Moreover, that haunting can cost you way more than you could ever make with the deal in the first place!

Sometimes the risks are just not worth the effort!