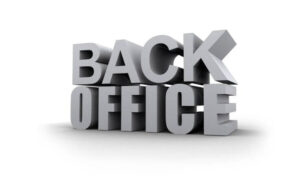 I have been involved in start-ups to the $100M business segment for most of my career. What is almost universal is that most business owners, whether first-timers, serial entrepreneur’s or professional management of start-ups to companies running about $40M in revenue just don’t understand, yet even appreciate what the back-office does for the organization. More importantly, they fail to realize what benefits can be gained from the back office if funded correctly and lead effectively.

A few of years ago, in 2011, I went to the New York Times Small Business Summit in New York City. It was a collection of about 600 men and women who were small businesspeople, entrepreneurs, either working start-ups ventures or the traditional small businesses: all seeking additional insight. At the plenary session, the guest speaker, Jay Goltz, a highly successful businessperson who after 7 tries finally hit the mother lode, an extremely successful company, spoke. He was at that time and until Dec 2014 wrote the You’re the Boss small business blog for the NY Times.

What made that session unique was not what he said, but the indifference shown by the attendees to anything but sales and marketing. I’ll clarify this later so as not to degrade those whose sole focus is sales and marketing. But without the back office, they couldn’t do their jobs.

Food for thought: what is your definition of the back office?

Well, the back office isn’t made up of little drone bees toiling in the dimly lit, drab back of the building within dingy cubicles; well maybe there are a few of them. You actually have all levels of employees that make your company succeed, livable and alive. From the janitors who keep it clean and mechanically operational to the shipping department, from accountants and bookkeepers to HR, as well as receptionists, information technologists and strategic planners.

To many in management it’s anyone not producing direct revenue; a somewhat myopic viewpoint, but a popular one. It is just this viewpoint that damages many a company. Damage in reduced productivity, reduced sales and exorbitant expenses.

My question was why no one was interested in the financial health or business processes that ran their companies. Why was it that no one asked about what type of bookkeeper or accountant they should hire internally? Did they need a CPA firm, and what could a CPA firm provide? What was the difference between a CPA firm and a CFO?

Forget about business strategic or tactical planning. FinTech was not even an issue (even though that term wasn’t in vogue then, the concept was still being practiced). Measuring success or other factors of the business through metrics or key performance indicators (KPI’s) never mentioned.

How about more mundane issues such as what’s more important, an income statement, the balance sheet or statement of cash flows? Are orders not shipped counted in those numbers? What’s the best way to source our product? And the list goes on; questions never asked or answered.

The lack of focus on these vital issues was absent from the other tracts that I attended. One track was co-chaired by Carol Roth, author and TV financial commentator whose book The Entrepreneur Equation was a New York Times Bestseller. Speaking to her at a break, she too wondered why these issues were never raised (except by your humble blog writer). In fact, a part of her book spoke about this very issue. Her book sat prominently in my bookshelf until Superstorm Sandy destroyed it and the rest of my office in the great flood.

So does the Back Office matter?

Granted, I am biased, for I could be considered the titular head of the back office. I am a Chief Financial Officer. However, my role is so much more than debits and credits which was the pivotal point of the job in an era gone by in fact, some of the best of breed CFOs are not even accountants or finance people. They are strategic thinkers, leaders, big picture people who know the right questions to ask of the subject matter experts to create the basis for what hopefully a correct decision is.

Nevertheless, all those professionals (and even that janitor can be considered a professional because it is a demeanor that is taken in the performance of duties) do make a difference. They enable the company to grow. There are more people in the military supplying support functions to the warriors than warriors themselves. Why, because tools, products, weapons don’t materialize by themselves; they are bought, catalogued, shipped, quantified, reported by the back office.

So next time you think about the back office or investing in back-office systems, understand that the investment may not make revenue directly, but that return on investment will enable the company to increase the top line and the bottom line as well.

What do you think?