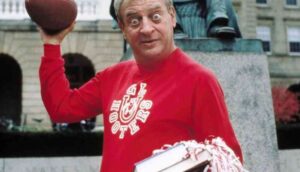 Thornton Melon: Oh, you left out a bunch of stuff.
Dr. Phillip Barbay: Oh really? Like what for instance?
Thornton Melon: First of all you’re going to have to grease the local politicians for the sudden zoning problems that always come up. Then there’s the kickbacks to the carpenters, and if you plan on using any cement in this building I’m sure the teamsters would like to have a little chat with ya, and that’ll cost ya. Oh and don’t forget a little something for the building inspectors. Then there’s long term costs such as waste disposal. I don’t know if you’re familiar with who runs that business but I assure you it’s not the boy scouts.
Dr. Phillip Barbay: That will be quite enough, Mr. Melon! Maybe bribes, kickbacks and Mafia payoffs are how YOU do business! But they are NOT part of the legitimate business world! And they are certainly not part of anything I am doing in this class. Do I make myself clear, Mr. Melon!

From the Movie Back to School (1986) starring, writer and screenplay Rodney Dangerfield

Years ago, I working with a Thoroughbred Horse Racing Farm. All the horses were strictly Thoroughbreds. Some were just boarder for their owners, other were directly owned (with a fair share of disparate partners) by the Farm ownership. Besides boarding, the Farm also bred, and foaled the mares. After spending time at the Farms, I came too fully understand the cliche  hung like a horse’.

The major owner was an older Italian Gentleman from Brooklyn. He originally was in the trucking business, owning a small but I am guessing lucrative trucking company. He barely completed high school. However, that did not stop him from becoming one shrewd businessman. Did he make money on every deal, no, but he did make money.

He was from the old school, the pre-computer, pre-cellphone days. He liked his rotary phone. Fax machines were okay, but he really did not trust computers. His partner’s in the Farm (actually there ended up being two farms, one in New York State, the other in Florida) demanded that the operation be computerized, which is how I came into the picture. It was educational, from both our perspectives as I tried to explain the why and wherefores of computerizing the operations and he would explain how it was not necessary.

He had a unique philosophy that was summed up by a favorite quote of his; and has since become a part of my lexicon. High Tech is not High Touch’. Six simple words to convey a concept that seems to be lost in our rush to embrace the B-school mantra of spreadsheets rule. Forecast: look at every financial angle, calculate the IRR, projected EBITDA, whether the project on paper is profitable. Decision: Go or no go based on the numbers. businessperson

His feelings were that while High Tech certainly had it place, that place was being overly prioritized to the detriment of High Touch’. High Touch demanded that one looking at the angles that could not be quantified with data points. businessperson

Having been involved in M&A transactions, the bottom line decisions were always related to hard data points regardless of symmetries, synergistic advantages, market or leadership, intellectual property being acquired. businessperson

Even during budget season, the same arguments are made, with the counter arguments (not always coming from the Office of the CFO) of why a budget item need to be $X, not the $Y figure in the current iteration of the budget.

Bottom line, we as CFO’s need to move away from the data point analysis (High Tech) and start moving to the strategic (High Touch) mindset if we want to be a true financial partner to the CEO. Sometimes spending more on esoteric items (Employee benefits and education), charging less to customers, allowing vendors to make a little more actually means that we as a company will in the end gain. We can gain respect, productivity, market share, improved quality.

Productivity increases, market share increases, improved quality translate to a value proposition that causes profits to increase. Therefore, at the end of the day, another favorite of the B-School crowd is satisfied, increased shareholder value.