I was talking with a friend who stated that since there is such a glut of available widget-makers, and that salaries have taken a 35-50% decline, that this was to be expected. These out of work widget-makers should take those jobs so they are ahead of the curve.

The concept of supply-and-demand in a purely academic fashion makes sense here. Oversupply leads to lower prices, higher demand increases prices, and scarcity of product come higher prices and with a fall-off of demand prices go down but there is a real-world wrinkle.
When the commodity is people; you’re buying not only skill sets but psyches and behaviors.
Behavior (perceived or real) on the part of an employer in the entire hiring process influences the employee’s loyalty, productivity, and longevity. If one thinks that businesses had human resource problems encompassing everything from sexual harassment to age discrimination and everything in-between, wait for a major upswing in our economy (which recent news reports is happening, albeit a little slowly for most).

The hiring process and training process are both time-consuming and resource intensive. No matter how senior a person is, there is a training and learning curve, from not only a technological perspective, but a system and policy point of view as well. Most importantly, culture change can have a dramatic effect on the business, the extant employees, and the new person. 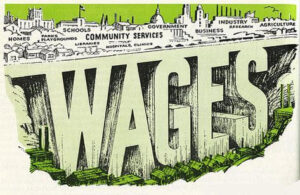 So, what is the ultimate effect on hiring people at 35-50% of their reasonable and normal salaries, just because there is a glut of talent? Dissatisfaction, little or no company loyalty, lower productivity, health issues on the part of the employees and the list can go on. Each of the preceding issues costs the company money. But that’s just the tip of the iceberg.

What happens when the marketplace picks up? Are you giving those same employees raises to minimize the discrepancy? Most businesses won’t and here is where myopia will cause the next round of expenses; ones that could have been eliminated by thinking ahead.

John Doe was hired at 50% of his previous salary because there are no jobs available at the higher rate and hiring managers feel that they can hire at a deep discount off normal rates and save money. John, while relieved that some money is coming in, is extremely displeased because he feels as if he is starting out all over (salary-wise) in a job that he has many years of experience in. He also has all the responsibilities and exposure as his previous job, but without the offsetting compensation.

John understands that the marketplace is poor, and if he started at a 15% discount on the salary, that would have been understandable, but not 50%.

John never stopped looking for a new job. He was offered a job on Monday. In the old days, John would tender two weeks’ notice. Today, he cleans out his desk that same night and never comes back to work again. John doesn’t share information about what is and isn’t in the pipeline as far as his work is concerned. He feels he was completely taken advantage of by this employer and as such sees no reason to assist in any way with a transition.

What did the rapid exit of John do to your company? How did it affect the Company’s morale, productivity, and its interactions with the vendors or customers? Was the savings on salary really worth it?

Management of a business encompasses more than just following laws and industry standards; it includes both internal and external strategies, expectations and the culture created within and without meeting those goals.

SBA * Consulting and its C-Level and Senior Managerial consultants in human resources, team building, marketing, operations, planning as well as other business facets can assist your organization in fine-tuning the business to meet ownership’s expectations, industry standards or legal requirements.

We believe in short-term engagements where we facilitate the process and provide your employees with the tools and skills to continue with the on-going improvement process without our attendance.