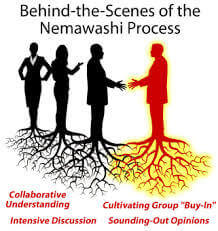 Nemawashi (根回し) in Japanese means an informal process of quietly laying the foundation for some proposed change or project, by talking to the people concerned, gathering support and feedback, and so forth. It is considered an important element in any major change, before any formal steps are taken, and successful nemawashi enables changes to be carried out with the consent of all sides.

Nemawashi is often cited as an example of a Japanese word which is difficult to translate effectively, because it is tied so closely to Japanese culture itself, although it is often translated as ‘laying the groundwork.’

This is a concept to ponder. It involves the major aspects of planning, where chief among those aspects is not only communication but empowering the ultimate end-user with a sense of inclusion in the process.

Many a plan hatched in management never see full implementation because the deck plates (naval term for rank and file) are never involved in the process. A process conceived in a vacuum, usually ends up with the same results, empty.

So next time you are thinking of implementing a new policy, program or any aspect of the business which will effect one or more people (including customers and vendors) think about Nemawashi and consider utilizing its principles before you “spring” the news.

Talk with us about Team-alignment and how GAP Analysis can help you start and finish that new project.